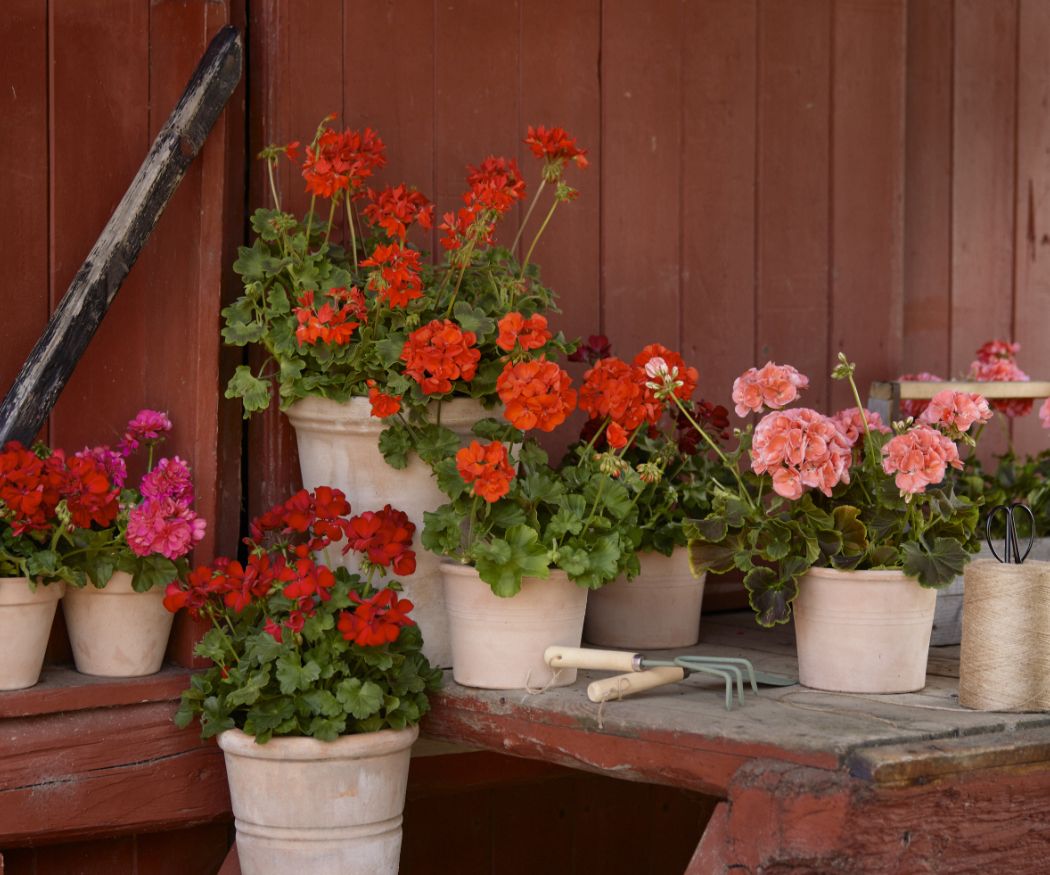 Everything you need to know about fertilising geraniums

Geraniums conjure up summer charm on balconies and terraces with a minimum of care. But even they cannot thrive on air and love alone. As so-called vigorous growers, they need a good dose of nutrients to grow and flower. And they get that by fertilising.

Let’s find out once and for all how your geraniums can grow beautifully and flower abundantly with the right fertilisation approach!

On this page you will learn:
• How to use liquid fertiliser
• Why it makes sense to use slow-release fertiliser
• When it is time to start fertilising
• When you no longer need to fertilise
• Why plants need fertiliser in the first place

Fertilising geraniums with liquid fertiliser – How does it work?

Mix liquid geranium fertiliser or liquid fertiliser for flowering plants into the water weekly or every 14 days, according to the dosage instructions.

1. Fill watering can with water
2. Measure out the appropriate amount of fertiliser (use a dosage aid)
3. Pour liquid fertiliser into the irrigation water
4. Stir with a stick
5. Pour directly onto the soil in the flower box or container. It is best to do this in such a way that nothing gets on the leaves or flowers and nothing runs off.

If the soil in the pot is just dry enough to come away from the edge, first moisten it with water and then fertilise. This will not damage the roots. In addition, the fertiliser will be better distributed.

What if fertilising every Saturday (or every other Saturday) is not your thing?
Then add a very small amount of liquid fertiliser to the water each time you water. Geraniums usually tolerate one millilitre of liquid fertiliser per litre of water quite well. A syringe or a shot glass can help with dosing if the dosing aid provided does not work.

A 10-litre watering can contains 10 millilitres of liquid fertiliser. That is 1 cl, or half of a shot.

With liquid fertiliser you supply the nutrients in a form that the roots can absorb directly.
Maybe the sun is shining extra brightly this year and the geraniums are growing like crazy. Or it rains a lot and the rain washes out nutrients. In both cases, liquid fertiliser does the job precisely and quickly.

Why is it often recommended to use slow-release fertiliser for fertilising geraniums?

We recommend using slow-release fertiliser. Once mixed into the soil according to the dosage instructions when planting, you won’t have to think about fertilising for several months.

But we want you to keep the following in mind: it is not certain that one dosage of slow-release fertiliser will last the whole season. Depending on the temperature and the soil moisture, your geraniums may need an extra dosage of plant food in late summer. If you notice that your geraniums are no longer flowering nicely or that they have yellow leaves even though everything else is fine, mix liquid fertiliser into the water regularly from that moment on.

Fertiliser sticks work in a similar way to slow-release fertiliser pellets. You can press them into the soil at any time after planting.

When to start fertilising geraniums

Start fertilising at the beginning/middle of June!
After about four weeks, the fertiliser in the fresh potting soil in which you planted your geraniums is as good as used up.

Why not fertilise from the beginning?
Firstly, because the plants do not need more than is in the soil at the beginning. Additional fertiliser would be a waste of money. On the other hand, the roots should still make an effort to get nutrients. In this way, the plants develop a more efficient root system. This will often help them over the course of the summer.

When to stop fertilising geraniums

In the UK, fertilising is no longer worthwhile by the end of September at the latest.
By this time the days are shorter and the nights are cool. The geraniums will grow less than in summer, and they will manage with the remaining nutrients in the soil.
If you plan to overwinter your geraniums, the end of fertilisation signals to the plants that it is time to prepare for the resting phase. Their metabolism shuts down and the cells get ready for winter.

Plants grow by forming new cells, called organic matter. Organic matter consists of chemical elemtns called nutrients. The plant gets these nutrients from the soil. If there are not enough of them, we can provide them by fertilising.

The main nutrients are nitrogen (N), phosphorus (P) and potassium (K). Their ratios are stated on all fertilisers.

Phosphorus (P) is considered a power nutrient for the plant cells and promotes flowering. If it is missing, the geraniums flower less and the leaves turn reddish in colour.
Caution: too much phosphorus will impair growth.

Potassium (K) regulates the water balance. It strengthens the plant tissue, boosts the plant’s defences and is needed for the formation of fruit. You can recognise a potassium deficiency when the older leaves dry up from the edges.

Plants also need calcium, sulphur and various other minerals such as iron and magnesium.

Welcome to the world of geranium inspiration and care information.

The most popular blog posts
7 Ways to Protect Geraniums from Frost and Cold
Geranium care: 5 tips that will make your balcony bloom effortlessly
Planting geraniums: Instructions for beginners and advanced gardeners

Are you looking for inspiration for your press article?

In our press area you will find a current press kit, many articles and a diverse image database.

To the press area

The world of geraniums: their varieties and uses

Anyone who thinks geraniums are boring hasn’t looked close enough, they’re not just simple red flowers in window boxes. These versatile plants have much more to offer for your ...

Geranium care: 5 tips that will make your balcony…

Everything is better with beautiful geraniums; especially in summer, when abundantly flowering balconies lure us outside. You might think it’s a lot of work to look after them, but ...